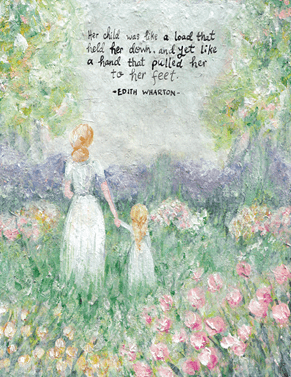 Haleigh DeRocher is an artist and owner of the small business Sweet Sequels. She creates literary-inspired paintings and turns them into goods for the home. More important than that job, she says, is her other full-time job — being a mom! She has three beautiful children, and her number one priority is to raise them to be good people and to love the Lord. She and her husband live in East Texas. Haleigh started Sweet Sequels shortly after graduating college with an English degree. Not having any plans to pursue a professional career in editing or teaching, and knowing she wanted to be a stay-at-home mom, Haleigh decided to take the plunge right away and start her own small business.

“The first couple of years were pretty rough, but once I found the right audience in the Instagram world (commonly known as “Bookstagram” — a community of readers), my business really started to take off, and now I am busier than I ever imagined I would be.”

Haleigh creates artwork inspired by works of literature, combining her two favorite things—painting and literature—to make a career. Classic authors like Edith Wharton, Charles Dickens, Jane Austen, Thomas Hardy, etc. are the basis for many of the pieces in her shop including woodmarks (bookmarks made of wood), blankets she has sewn herself, mugs, journals, art prints, and apparel. She also recently illustrated her first book Summer, by Edith Wharton — with plans to do many more.

“I read a lot and find that the well of inspiration in classic literature never shallows. When I read, certain quotes pop out at me and I think ‘I need to make a painting of this.'”

Haleigh’s artwork does more than just highlighting literature, however. It has also become a platform for her to share her pro-life views through her artwork. Haleigh has been pro-life for as long as she has known what abortion was; which, surprisingly, wasn’t until early high school. Even then, it wasn’t something she thought much about until she had her first child. After reading Melissa Oden’s book, You Carried Me, Haleigh began speaking out about abortion. With a growing platform on Instagram, she felt God place it on her heart to start talking about abortion to her book-loving audience.

“It’s hard for me to wrap my mind around the fact that most people don’t hear about abortion. Most people don’t take the time to really think through the issue. For a lot of people, it begins and ends with ‘women have a right to choose what they do with their body’ — and that isn’t really the issue at all. We’re talking about a human life that people — mothers — are willing to just cavalierly throw away. Why don’t schools educate students about abortion? Why didn’t I hear about it until I was a teenager? And why was I left to learn about it on my own? These questions really bother me. Let’s talk about it more”

Haleigh believes God has called her to spread His Truth and Light through her artwork. Inspired by words that move her, such as literature and God’s Word, she wants her artwork to likewise speak to those who see it.

This message hasn’t always been well received. While she has always been vocal about her pro-life beliefs, often advocating groups like Save the Storks and her local pregnancy center, recently, Haleigh recently pointed out the history of racism within the abortion movement amid the renewed discussion of BLM and race in the United States. She called for her followers to do some research on the racism of Margaret Sanger, the founder of Planned Parenthood, and urged them to look into statistics of abortion in the black community. Before long, her post had spread like wildfire within the book community and she came under fire for her statements. She was called racist and had at least one person tell her she was “literally brutalizing black people” with her post.

Haleigh’s comments were accurate, though: Margaret Sanger was a eugenicist who sought to eliminate the black population, and Planned Parenthood continues her mission today. While African Americans make up only 12% of the United States population, black women account for 38% of all abortions. This disparity is caused in part by the fact that Planned Parenthood targets women of color. A whopping 79% of Planned Parenthood’s surgical abortion centers are located in minority neighborhoods. In New York, more black babies are aborted than are born alive.

Despite the accuracy of her claims, Haleigh lost hundreds of followers, was the recipient of numerous hateful comments, and even lost a collaboration deal with a large subscription box. In spite of all this, she didn’t back down because she knew what the truth was and knew that others needed to hear it.

“I received many comments along the lines of: ‘Don’t you see how many people are telling you that you are wrong? You need to apologize/delete this post/delete your account.’ And my response to that was this verse: ‘If the world hates you, keep in mind that it hated me first. If you belonged to the world, it would love you as its own. As it is, you do not belong to the world, but I have chosen you out of the world. That is why the world hates you. Remember what I told you: ‘A servant is not greater than his master.’ If they persecuted me, they will persecute you also. If they obeyed my teaching, they will obey yours also. They will treat you this way because of my name, for they do not know the one who sent me.  If I had not come and spoken to them, they would not be guilty of sin; but now they have no excuse for their sin. Whoever hates me hates my Father as well.’ (John 15:18-23)”

Now Haleigh’s message to other pro-lifers is to speak out and not be afraid. The truth needs to be spoken out to change hearts. “And,” she says, “if your words affect just one person, then it is worth it. You may lose followers, but you may gain even more. And if it isn’t followers that you gain, it is blessings stored up for you in heaven. We are doing the Lord’s work.”

To those who are not pro-life, Haleigh encourages them to do their own research and relentlessly seek the truth. Some of the books she recommends are: A Child is Born by Lennart Wilsson, Unplanned by Abby Johnson, You Carried Me by Melissa Ohden, Gosnell by Ann McElhinney and Phelim McAleer, and The Doctrine of Balaam by CR Cal.

Now more than ever, it is time for pro-lifers to speak up and speak out. We also need to be there to encourage each other in the face of increasing attacks against life. Go check out Haleigh’s shop and her beautiful creations at her website and check her out on Instagram!

The artwork shared here is with permission of the artist.