So What’s the Big Deal with Abortion? 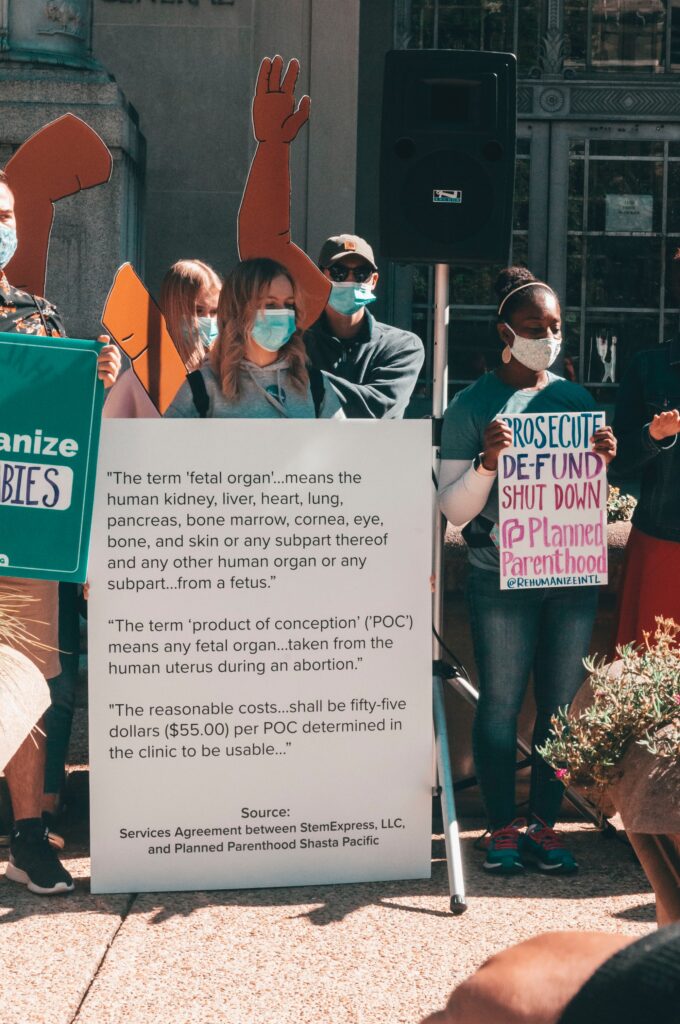 Without a doubt, the 2020 Presidential Election was an election season like no other. Voters turned out in record droves, and it took days just to confirm the results of the election. Unlike many other elections, however, abortion became front and center in the public discourse, and for good reason: The abortion industry was afraid of the reelection of President Donald Trump and how he would use his office to stop abortion.

In addition to this, a strange trend began in the weeks preceding the election as several prominent Christian leaders began to issue public comment in opposition to Trump’s reelection. A bizarre series of statements by some of the most famous pastors in America went viral, talking about how even though they opposed abortion, they saw other issues as more pressing. John Piper, in one article asserted “It is baffling to assume that pro-abortion policies kill more people than a culture-saturating, pro-self pride.” Presbyterian Pastor Tim Keller stated on Twitter that “The Bible tells me abortion is a sin and a great evil, but it doesn’t tell me the best way to decrease or end abortion in this country, nor which policies are most effective.” Even Phil Vischer, the creator of VeggieTales, released a video criticizing Christians who exclusively focus their attention on the legality of abortion and allow it to form the basis for their political action.

Other examples could be cited here. A refrain often heard is that “Being pro-life means more than just opposing abortion.” These sorts of soundbites have become increasingly common in Christian circles, and have muddied the waters, so to speak, as to what it is we must focus our time and energy in opposing. Should the church lead the way in opposing abortion? Increasingly, it depends on whom you ask.

So What Is the Pro-life Position?

It is becoming apparent from reading the comments of many influential pastors, and especially from some pro-life advocates, that when it comes to the issue of abortion, many pro-lifers don’t seem to get it. For many, abortion is more of an abstraction. For some, it has turned into an exercise in the theoretical, not the practical.

Because of this distinction, many people who would otherwise join in the push to stop abortion have yet to be fully mobilized to action. Why fight against an abstraction when there are more pressing real world issues to be dealt with? Hence, why we get many of the above comments. Many people have been left confused as to what the pro-life position really is, and end up wondering why abortion is such a big deal in the first place.

We know the unborn, who are targeted in abortion, are members of the human family. Common sense and the science of embryology confirm this. In a recent survey by University of Chicago researcher Steve Jacobs, JD, PhD, 96% of the more than 5,000 biologists surveyed acknowledged human life begins at the point of fertilization. Embryology textbooks repeatedly affirm this. Anyone who wishes to argue that human life begins at some point later in pregnancy needs to take the scientific findings of embryology into account and make their case using embryology.

Common sense also plays a role. Sure, the unborn are different now than they will be after birth; even drastically so. They’re smaller, less developed, in a different environment, and more dependent on someone else for their survival than they will be after birth. And yet, deep down we all know that none of these differences really matter in the long run. We know our fundamental humanity is not called into question by being smaller, less mature, in a different environment, unable to do what you can do, and less independent than you are. We all know these differences are not good enough when deciding whether or not we can kill someone.

Unfortunately, many people who get this concept tend to only understand it in an abstract sense. Sure, the unborn are human, but so are the born. Why make such an issue of the unborn when there are pressing issues faced by people outside the womb?

Very often many of the people who make statements like those above are well-intentioned but also badly misinformed. They don’t actually understand what abortion is, how it is performed, how often it happens, or what the threat to nascent human life really is, and thus don’t get what all the fuss is about.

This is the Big Deal

Perhaps the best way to understand why abortion is such a big deal is to simply look at abortion itself. Images of abortion have been and always will be the most effective tool for changing minds at the pro-life movement’s disposal. Images reach us at a level words alone cannot, by showing us what exactly the issue is with abortion. Images leave no room for the pithy slogans and euphemisms typically cited by those who wish to justify abortion. Anyone who wishes to defend abortion needs to actually defend abortion, as it is performed, not based on what they want it to be.

In addition, focus needs to be drawn back to the act of abortion itself. If we want to see what the big deal with abortion is, we need to actually look at abortion. It’s worth examining what abortionists say about the procedure, and how they perform it. Dr. Anthony Levantino, a former abortionist, has provided several videos breaking down the details of the various abortion procedures. Furthermore, there are several medical textbooks written by abortion providers instructing physicians on how to perform the procedure.

In a first trimester aspiration procedure, the abortionist will use a suction catheter to vacuum the so-called “products of conception” from the uterus [1, 2]. Given what embryology and simple common sense reveal about the nature of the human embryo, we know that this involves killing a tiny human being by ripping them into pieces. It would be akin to being sucked through a jet turbine or a wood chipper. While some have asserted that aspiration abortion removes nothing more than tissue, images taken within the womb during the first trimester reveal a miniature human being actively growing and developing over time. For instance, at seven weeks gestation, this tiny human being has clearly visible facial features such as a mouth, nose, and chin. A human organism, not mere tissue, is killed.

The procedures get more brutal as we get farther in pregnancy. As we get into the latter part of the second trimester, the procedure has to change, because, as abortionist Warren Hern points out, the fetal human being in the 12th week is much larger and “heavier” than before, and needs to be dismembered (Hern’s word) using a different method. Suction alone is often not enough.

Additionally, the severed skull of the unborn child needs to be dealt with, in which the abortionist looks for the “Calvaria sign” to ensure the fetal head has been crushed and can be removed. Writes Hern,

“As the Calvaria (skull) is grasped, a sensation that it is collapsing is almost always accompanied by the extrusion of white cerebral material from the external os (bone) [3].”

Additionally, other methods must be used by the abortionist at this point. Forceps are used to dismember body parts inside the womb or to remove body parts left over after the fetal human being is ripped apart by suction.

As one abortion textbook details,

“With a large-bore cannula(suction machine), suction alone is usually adequate to remove 14- to 16- week pregnancies…Beyond 16 weeks some pregnancy elements may remain in the uterus after suctioning and require extraction by forceps; most commonly these remnants include the spinal cord and calvarium(upper skull) [4].”

Abortionists are instructed to use a “gentle rotation” to remove fetal body parts from within the womb [5]. It doesn’t take a medical practitioner to see that this means the doctor is using the forceps to tear the unborn baby’s body into pieces.

After the D&E, the abortionist isn’t done with the body parts of the baby. They need to make sure they got everything. Abortion doctors are instructed to collect and inventory the dismembered body parts to ensure nothing was left behind [6]. As one abortion manual puts it,

“After completion of the D&E abortion, examine the pregnancy tissue. Although complete reconstruction is not always possible, verify the presence of major fetal parts, including pelvis, torso, calvarium, and extremities…Some providers routinely measure fetal foot length after D&E as confirmatory evidence of gestational age [7].”

Lastly, for abortions later in pregnancy, abortionists have a new problem on their hands: the possibility the child might be inadvertently born alive. There is a method for preventing this, however, through the use of feticidal agents such as Digoxin and Potassium Chloride. These drugs induce cardiac arrest in the preborn baby.

“Where the fetal abnormality is not lethal and abortion is being undertaken after 22 weeks’ gestation, failure to perform feticide (administer drugs to kill the fetus) could result in a live birth and survival, an outcome that contradicts the intention of the abortion. In such situations, the baby should receive the neonatal support and intensive care that is in the infant’s best interest and its condition managed within published guidance for neonatal practice [8].”

As another abortion textbook explains,

“Injections to cause fetal demise prior to operative evacuation may have certain benefits. At gestational ages when a live birth is possible, these injections avoid that possibility, including in patients who experience labor following cervical preparation [9].”

One last point regarding injections of feticidal agents, abortionist Maureen Paul and her colleagues point out these injections also help to make dismemberment easier by softening fetal bones; when it comes to bans on partial-birth abortion, they recommend

“providers who intend to remove (or who know there is a strong possibility of removing) the fetus in a way that would violate the ban if the fetus were still living must ensure fetal demise before the fetal head or any part of the trunk is outside the woman’s body [10].”

In other words, so that you don’t get accused of committing infanticide, make sure you kill the baby before they get a certain distance through the birth canal in order to adhere to the law.

With abortion, we are not dealing with a mere abstract issue. Given many of the above comments and others [11], when it comes to abortion, we’re dealing with the barbaric. Even abortionists admit to the gruesome nature of the procedure [12].