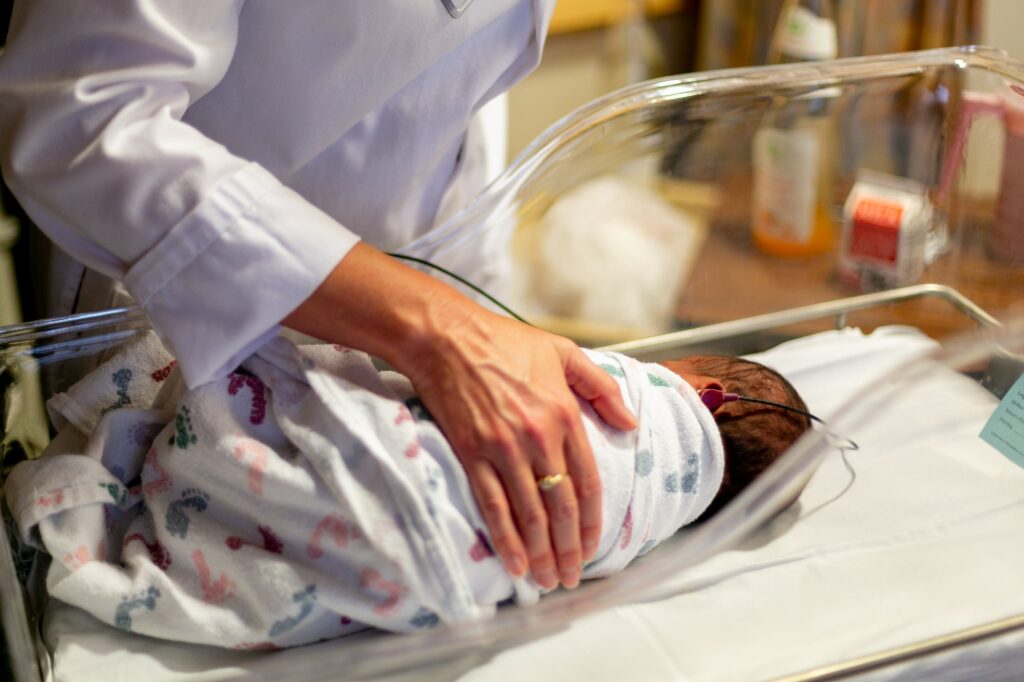 Neonatal Intensive Care Units (NICUs) are vital to providing medical care for babies with special needs. While we may automatically think of preemies when thinking of babies in the NICU, in reality, about half of all babies admitted to the NICU are actually at normal birth weight and 37+ weeks old. NICUs help babies who have birth anomalies, heart conditions, jaundice, brain injuries, genetic conditions, breathing difficulties, infections, Rh incompatibilities, and more. In fact, about half a million babies each year in the United States get admitted to NICUs.

There are different levels of NICUs, as well. Not all NICUs are equal, and each level has different types of support and medical treatment they are equipped to provide. However, sometimes the level of NICU does not matter as much as the experience or history that some of the NICU staff or hospital has had. For example, as I was informed when writing the article about viability of 22 weekers, a Level 3 NICU with staff who have experience with micro preemies and a hospital which has a history of resuscitating or providing care for 22 weekers can actually result in a higher chance for survival than some less-experienced Level 4 NICUs. But generally, NICU levels are structured as follows:

Level I, basic: Required for any hospital with labor/delivery services, able to care for babies 35+ weeks old, and able to stabilize more ill or younger babies until they can get to another, more advanced NICU.

Level II, specialty/advanced: able to care for babies 32+ weeks old, treat babies who are moderately ill, and help babies recovering from a more serious illness. Some Level II NICUs may be able to provide mechanical ventilation.

Level III, subspecialty: able to care for babies younger than 28 weeks old, and treat severe illnesses, with a range of capabilities for imaging, life support/ventilation, and access to subspecialty doctors.

Level IIIC NICUs may also be referred to as Level IV NICUs, and these NICUs are the ones placed in hospitals specifically equipped to perform surgery to address severe congenital or acquired conditions.

Even babies who “graduate” from the NICU may need prolonged and even lifelong support for various physical, mental, and/or developmental needs. This can be hard on families as well as the child, but there is ongoing support available! A baby needing to be admitted to the NICU can still grow up to live a healthy, happy, satisfying life, no matter how that looks for them and their family.

Families can find resources and information in a variety of places now, such as through the National Perinatal Association, NICU Parent Network, Support 4 NICU Parents, Hand to Hold, and Project Sweet Peas. There are also resources for families who have lost their babies in the NICU. Project Sweet Peas has memory boxes parents can receive for free, the Angel Gown Program provides free baby gowns for final photos and services. There are also many other organizations and services available to help families walk through the NICU experience and, if needed, to work through grief.

For the healthcare providers, there are some great resources for ongoing education and evidence-based practices, such the National Perinatal Association, My NICU Network, and My Perinatal Network. NICU doctors, nurses, and staff are highly specialized in their jobs. There is growing momentum to support the parents of the babies rather than solely provide specialized medical care to the baby.

In the final week of September in particular, there are special days set aside for remembering various aspects of NICU care:

For me, NICU Awareness Month is a special month because my younger brother was a preemie and a NICU baby. I asked my mother to tell me about her and my brother’s NICU experience so I could share it for this article. Not every NICU experience for a baby or their family will look like the two different NICUs discussed below, but I hope it can give some parents insight into what is possible for their baby and their experience, and how amazing and supportive NICU staff can be!

The following is her story [with my clarifications in brackets]:

Will was born exactly 4 weeks early [actually during NICU Awareness Month] — after trying to be born at 26 weeks, 30 weeks, and 34 weeks; the doc finally let him arrive at 36 weeks. He weighed 8lbs, 8.5 oz. at birth and his lungs were developed enough that they did not keep him in NICU at all.  Actually, he was born at 6:06pm, and we were leaving the hospital at 9:30am the next day. Yes…that’s 15 hours after birth (can you say “mommy was a wreck!”).

He seemed to do just fine until the night of day 7 into day 8.  He was cranky, lethargic, wouldn’t eat, and cried at every turn of the vehicle even while sleeping. I went straight from taking your dad to work to the ER at Shawnee Mission Medical Center [SMMC, where he was born — Level III NICU]. Once there, symptoms were discussed and meningitis was suspected. They did a lumbar puncture that came back positive for bacteria spinal meningitis. It was awful. They did not allow me in the room for the procedure, and Will was screaming his head off! SMMC said they weren’t equipped to handle this type of NICU situation, so Will went in an ambulance to Children’s Mercy [CM, Level IV NICU]. When we [my mother and father] arrived at Children’s Mercy, they sent us up to the NICU on the Infectious Disease floor. When we got up there, they said they didn’t have any Baby Wallenmeyer. I nearly lost it! The poor lady at the counter didn’t know what to do with me. However, right around then a group of docs came out of a back room, and there was Will! They had whisked him out of the ambulance and directly upstairs to a procedure room due to his IV. SMMC had put in an IV to start antibiotics right away….but, they’d put it in his arm, where you get blood drawn and had splinted his arm. Will was NOT happy. The CM doc said that was absolutely unacceptable; everyone knows you put a baby’s IV in their foot, so you don’t need a splint and it’s out of the way for feeding, etc. Anyway, before even registering him, they redid the IV port to make him more comfortable.

The doc handed Will off to a nurse who took care of settling him in his room, and the doc took us aside to a big window that had a wide enough ledge to sit on (weird, the things you remember). I remember him looking me right in the eye and saying, “Mom, I’m not going to pull any punches with you. I’m going to be honest — your son only has a 50/50 chance of surviving this infection.” He went on to explain what the process was going to look like as they treated Will for the infection. He was very kind, but brutally honest. Looking back, I’m glad he was. I wouldn’t have wanted false hope that ended up shattered.

I was allowed to stay in the room with Will, but I could not go anywhere else except the shower [because he was on the Infectious Disease level]. He was in a medically induced coma-type situation. Every 6 hours, they would bring him out enough to eat, and while he was eating, they dosed him another round of antibiotics. Then, back under he went for 6 more hours. I was allowed to hold him, usually only putting him back in the little NICU cubbie-thing to sleep at night. He wasn’t hooked up to life support or anything, just the IV port. The docs were always up front with me regarding Will’s condition. They took blood from him for testing daily. They checked on me regularly to see if I needed anything, and someone always brought me food! The nurses knew I was reluctant to leave Will’s side even for a shower, so one of them came in and held him while I ran down the hall for 10 minutes about 3 days out of the 7 days we were in the hospital. Those little things meant the world to me. Someone was showing much care and love towards my baby boy when I couldn’t be right there.

The prognosis was never upgraded; it daily remained 50/50. Until the 7th day, when the doc came bounding in the room that afternoon and said, “How’d you like to go home today?” I nearly fell over. He said that Will’s blood work that morning had shown no sign of infection whatsoever, and the afternoon labs confirmed it. The doc didn’t understand, because the blood work all week showed the infection. He said he’d been hopeful for good news in 10 to 14 days, but on day 7…well, he was about as ecstatic as I was! He cautioned that while the infection was gone from the blood, Will could have residual complications like hearing loss, neurological issues, or some learning disabilities, and/or stunted growth, which may only be apparent later in development. I remember telling him that people from Pennsylvania to Arizona had been praying for Will, so I wasn’t worried about any further complications [spoiler alert, no known complications ever manifested].

We were able to pack our bags that evening and scoot out of the Children’s Mercy Infectious Disease NICU. Seriously, the doctors and staff were great. Always answered any questions, always were honest. But, they were also compassionate in letting me stay with him, hold him, feed him, everything. The only bad part (beyond it being my son in the hospital dying) was the baby in the next section. He was critically ill and he cried all the time. He would stop if someone held him, but the nurses didn’t have time to do that 24/7, and the baby’s parents, in the 7 days we were there, never came one time to see him.

How You Can Help

Life is precious, and we rejoice that technology and medicine have come so far that some of the smallest and most vulnerable people in our human family can be stabilized, treated, and healed. Pro-life advocates do care about babies after they are born, and we care about the women and families involved, too. We can help babies, their families, and NICU staff by:

For donations involving your local NICU such as cards. food for staff, and baby items, be sure to contact the hospital first. Hospital policies vary, and you may need to have your donation or idea approved before carrying it out.