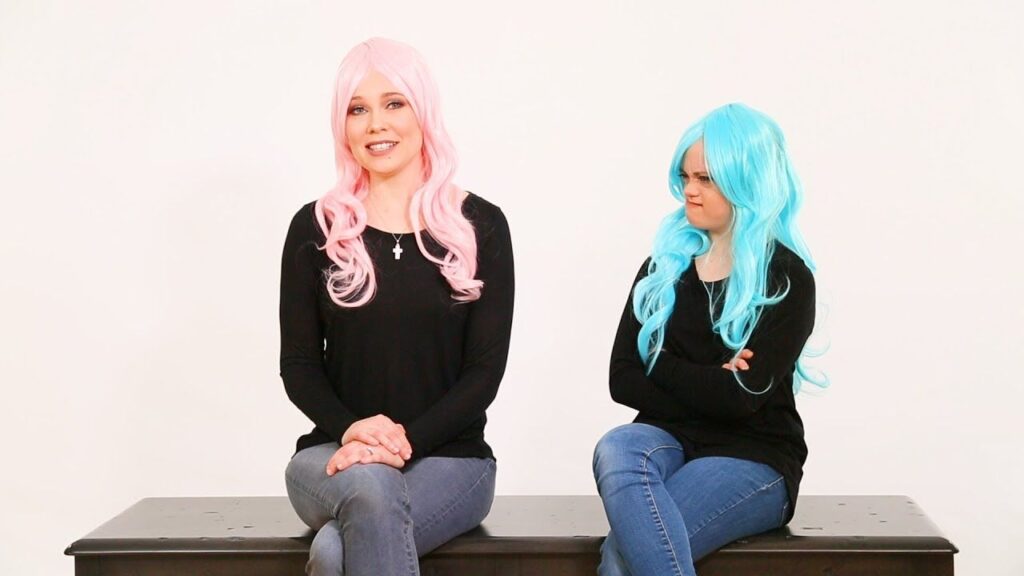 How should a civil society treat those who do not meet our standard for value? Can we kill them if we so choose?

Part of their “#Justsaying” series, the video humorously highlights the reasons given for abortion in the case of Down Syndrome. Just over a minute long, the video features Choice42 Spokeswoman Laura Klassen talking indirectly to a young woman seated next to her wearing a loud blue wig. Titled “Blue Hair,” Laura makes a series of remarks to her audience that are brimmed with absurdities.

“I love people with blue hair! But like, after they are born though…”

“I totally respect and value you as a human being…now….”

“But before you were born, it was a completely different story, just saying…”

To which, in response to these comments, her blue-haired co-star humorously grows more and more outraged. Laura continues,

“Now, thanks to prenatal genetic testing, we can off all the people who have blue hair before they ever see the light of day! Now that’s compassion.”

Eventually, her co-star holds up a poster board with the words “That’s Eugenics.” Laura stops her before she explains with the remark,

“I literally don’t know what that word means.”

The video ends with Laura stating,

“If we eliminate all the people who have blue hair, the world will be a little more perfect, but a lot less colorful. And isn’t that what we all want?”

The video is very humorous, but Laura has helped shed light on a horrific practice that continues to thrive in the shadows of the West—the abortion of children pre-diagnosed with Down Syndrome while still in the womb.

“A lot of the Down Syndrome Rights Groups are trying to combat the stigma against people who have Down Syndrome by putting out beautiful videos that show how wonderful people with Down Syndrome are. Those videos are great, but they are not addressing the fact that most children who receive a prenatal diagnosis of Down Syndrome are aborted. Iceland claims to have eradicated Down Syndrome, but they haven’t found a “cure”, they’re just killing every baby that has it before they’re born. North America is not far behind. This is an issue we need to bring a lot of public attention to. We need to be a voice for these babies before it’s too late. Hopefully our video will reach the masses and get people thinking about eugenics.”

Two years ago, CBS News ran a story on the “Eradication” of Down Syndrome in Iceland.  The article “What Kind of Society Do You Want To Live In?” highlights how most women who receive a diagnosis via prenatal testing will most often choose to “terminate” their pregnancy (a common and even less humane  term than abortion). The story generated much anger and horror at the practice. Unfortunately, there are many people who don’t see this as a problem. After all, we are told, these children and their parents will have a very hard life. Who are we to bring them into the world?

During campus outreach in the San Diego area with the Center for Bio-Ethical reform, a student posed this question to me. Would I be okay with fathering a child with Down Syndrome?

My answer was yes, but this is the wrong question to ask. Why just stop with abortion? Suppose I had a two year old son who had Down Syndrome. Would it be an acceptable answer to say we should just kill him “to prevent future suffering”? Clearly, that isn’t a valid option. So why kill these same children before they are born? Do they differ from the born in some way that justifies intentionally killing them?

Stephen Schwarz  has a helpful way of examining the differences between the born and preborn to determine if there is a relevant difference between the two. Schwarz’s “SLED Test” lists four categories that are helpful  to answer the question of abortion in general and particularly in the case of abortion for children with a fetal anomaly, such as Down Syndrome. The categories and responses are:

Size: It is true, the preborn are much smaller than the born. And…? Since when does size make the difference when it comes to whom we may intentionally kill? Human beings after birth are a variety of sizes and may change sizes over the course of their lifetimes. Do the rights they are entitled to depend in their size? Clearly not, so why draw the line before birth?

Do humans also lose their value if they don’t “look right”? Some human beings do not look like the rest of us. And so what? Are we able to treat them however we may please?

Level of Development: Sure, preborn children, including those with disabilities, are far less developed before birth than after. So? What does that prove? That there are human beings we may legitimately dispose of when they “don’t come out right?” How does it follow that because some humans are less developed than others, we are justified in purposely disposing of them and “trying again”? A two year old girl may be less developed than her twenty two year old cousin in many ways, mentally, physically, sexually, and emotionally. Perhaps she will never fully develop to the extent her cousin is. Are we therefore justified in treating her as less than fully a person because of it? Most people (who are of a clear-minded conscience) will immediately say no, she is valuable as a human being. Well, so are the preborn.

Environment: Of course, the preborn have yet to be born. So? How does where you are determine what you are? As Laura humorously points out in another video, “The Magical Birth Canal,” this is just silly.  It gets sillier the more one reflects on it. How does a change in location change one’s obligation to not intentionally kill that human being? The clear answer is obvious: Location inside the womb is irrelevant. Laws that posit “personhood” beginning at birth (and the protection against being intentionally killed) are absurd.

Degree of dependency: Yes, the preborn are more dependent than the born on their mothers for survival. What does that prove? Dependency on another human being can vary for years and decades after birth, based on a variety of circumstances. A newborn baby, an elderly dementia patient, a gravely wounded soldier on the battlefield, and, yes, a person with a disability all have differing degrees of dependency compared to other human beings. That doesn’t mean we may justifiably discriminate against them, exploit them for our pleasure, experiment on them at will, and kill them when they get in the way. Those who depend on us for their well-being deserve to be protected, just like able-bodied adults. The preborn are no exception.

Anyone who wants to posit a difference between the born and preborn bears an immense burden of proof in demonstrating that we somehow owe less to one set of human beings than another. Given the blood-soaked historical results of getting the question “What does it mean to be human?” wrong, this shouldn’t be dismissed with a mere “quality of life” excuse. Why do the able-bodied get to decide what “meaningful” life is for those human beings who are a little bit different than the rest of us? How is that even remotely “pro-choice”? Shouldn’t we let our brothers and sisters decide what life means to them, even those  yet to  be born?

The pro-abortion viewpoint ultimately rests on arbitrary and bigoted distinctions among human beings, suggesting  that some human lives are worth more than others and may be discarded when they don’t “measure up” to the definitions of value put forward by whoever happens to influence the culture.

What Laura and her team at Choice42 have done is show the absurdity of drawing a line between groups of human beings to justify our desire to be free of any burden to our petty desires. Because ultimately, when compared to the lives of our fellow brothers and sisters, our desires for autonomy, freedom, and goals are overshadowed.

Yes, loving another human being can be costly. But what else is there? What else can compare? The preborn child who will be born “different” deserves to be loved and protected, just like his born brothers and sisters. That is what is owed by everyone, male and female, young and old, able bodied or not so much.

Watch the video below: