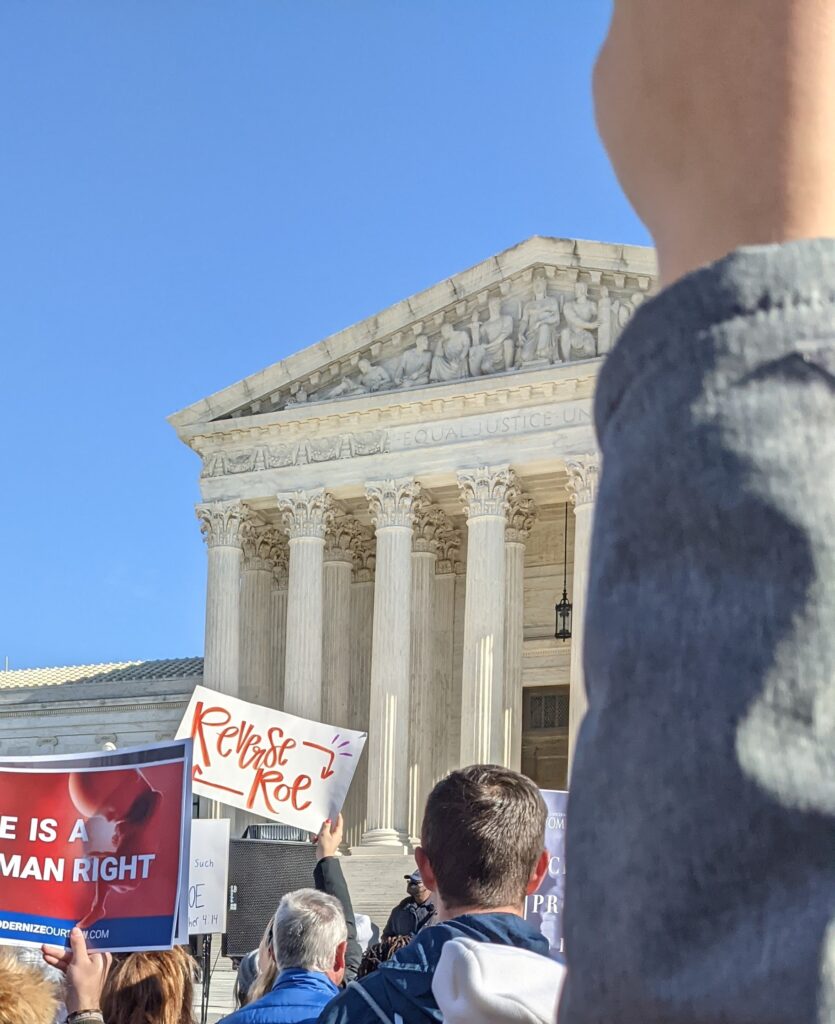 This case involves a Mississippi law banning abortion after 15 weeks. A lower court ruled the ban unconstitutional and blocked it from taking effect. However, the State appealed to SCOTUS and Court agreed to hear the case with regard to only one question: are all pre-viability ban on abortion unconstitutional? You can read a bit more about the case and its implications here.

The pro-life movement was out in full force on December 1 at the bottom of the steps of the Supreme Court. I had the privilege of traveling to DC to be present for this momentous occasion thanks to our good friends over at Secular Pro-life, and I came away with several interesting observations I’d like to share.

I’m also not used to more pro-life amicus briefs being filed than pro-choice ones, yet that is also the situation for Dobbs. An amicus brief is basically additional documentation a party interested in and affected by the case can file to show support for one side or one particular outcome. Around 150 of these briefs were filed, and only around 50 of them were in support of the pro-choice side (to uphold the injunction against the 15-week abortion ban). This is significant, both because of the number (the marriage equality SCOTUS case for the 2014-2015 term previously had the highest number, coming in at 147 amicus briefs) and because the ratio of pro-life to pro-choice briefs is opposite to what it normally is.

Both of these observations lead me to believe that this is one of the largest, most coordinated efforts the pro-life movement has put forth to topple Roe.

The pro-life crowd and rally speakers showcased diversity in pretty much any demographic you could think of. The theme was Empower Women, Promote Life (you can see a lot of rally news on social media by searching the #EmpowerWomenPromoteLife and #DobbsvJackson tags). The rally went from about 9am to 1pm. The time from 9am to noon was mostly taken by female leaders of the pro-life movement, and the time from noon to 1pm was mostly taken by a mix of male and female pro-life politicians. Mississippi Attorney General Lynn Fitch came out after the arguments were over to give a few words, as well.

I can’t say how disappointed I was when I heard the pro-choice rally speakers pushing the idea that the pro-life movement was all about religious ideology right after Monica Snyder, Executive Director of Secular Pro-life, gave her speech (you should really watch it!). It seems the pro-choice side is desperate to frame the pro-life movement in very specific ways so they don’t have to address our actual beliefs and arguments.

I was also extremely disappointed that the NBC camera crew only pushed their way through the crowd to get close to the front to film the rally speakers after an older white male politician took the stage. For hours earlier, they had been near the back of the crowd, filming or interviewing or just waiting. It was obnoxious to watch what seems like clearly biased news coverage taking place. Don’t me wrong — we need everyone in this fight to end abortion! But for a camera crew to ignore 3 hours of powerful pro-life women who are leaders of our movement, and even the first few female politicians, to come to the front to catch the first speaker who fits what is cast as a negative stereotypical person in the pro-life movement, is just too perfectly bad to think of as a coincidence.

While I did not circulate the crowd like my friends did, those who did came to share than many of the people in the pro-choice rally seemed a bit disconnected from the angry, harsh speakers. The crowd-goers seemed like people who were reasonable and willing to converse with those from the other side. Conversations were had, middle ground was reached, and hugs and handshakes went around. That gave me encouragement and hope. Not everything is like it seems on the internet and social media. Many, many people are willing to have good conversations with those they disagree with.

Of course, there are exceptions to each side, and I saw those, too. Pro-life people telling the pro-choice people that women who have had abortions are baby killers who are going to hell. Pro-choice people telling pro-life people they’ll have an abortion no matter what, just to spite them. All sorts of weird signs on both sides about things that had nothing to do with abortion. That saddened me, because there was one reason for the rally. Is it really so hard to stay on-topic for a single day? And is it really so hard to treat people, even people who you think are wrong, with basic human decency? I guarantee you news coverage on both sides has highlighted and will continue to highlight the extremes of the opposite side present.

I don’t know what the future holds. I want to be hopeful for even a narrowly-ruled win for the pro-life side. However, my cynicism tells me to not hold out any hope. If you’d like to hear some people smarter than me (and who listened to all the oral arguments on December 1) talk about what they heard and what they think could happen, go watch Josh, Emily, and Andrew from Equal Rights Institute in this video.

Whatever the outcome, the pro-life movement will not stop.